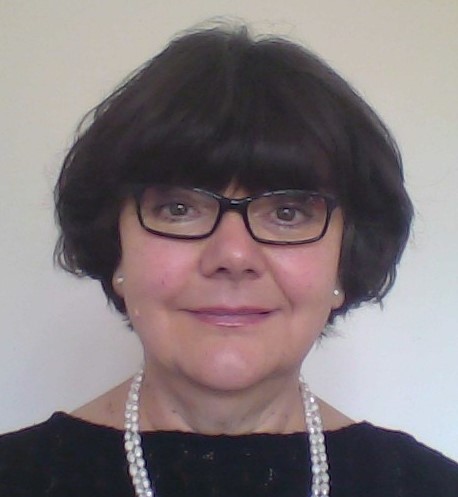 by Ingrid Goodspeed, Governor of the South African Institute of Financial Markets

South Africa’s shift to the twin peaks financial sector regulatory framework was proposed in National Treasury’s policy document A safer financial sector to serve South Africa better in February 2011. The proposal, adopted by Cabinet in July 2011, is to separate prudential and market conduct regulation and supervision and is structured around the following policy objectives:

Implementation of the model is a two-phase process. The first phase involves developing and promulgating overarching legislation i.e., the Financial Sector Regulation Act (FSR Act) to empower the prudential and market conduct regulators to deliver on their mandates. The second phase comprises harmonising financial sector legislation such as the Banks Act, Long- and Short-term Insurance Acts with the FSR Act and developing conduct of financial institutions legislation. The expected completion of phase one is 2017 – the FSR Bill was passed by the National Assembly on 22 June 2017 and signed into law by the President on 21 August 2017. Phase two work has already begun with the drafting of the Insurance Bill (tabled at Parliament in 2016) and the Conduct of Financial Institutions (COFI) Bill (due for release for public comment soon, possible still in 2017). The rest of phase two may take a number of years. An overall timeline for implementation has not been published.

The current framework for financial regulation and supervision in South Africa is complex with a number of regulators – see figure 1 for a simplified depiction. The main regulators are Bank Supervision Department (BSD) of the South African Reserve Bank (SARB) and the Financial Services Board (FSB-SA). BSD prudentially regulates and supervises banks and the FSB-SA most non-bank financial institutions as well as securities markets, where it relies on self-regulatory organisations such as the JSE and Strate. The National Credit Regulator (NCR) regulates the market conduct of all credit providers (banks and non-banks) and the National Consumer Commission (NCC) the market conduct of all consumer goods and services providers as well as banks (other financial services firms have been exempted). To add to the complexity, financial sector regulators are to varying degrees subject to the authority of two government departments. The Department of Trade and Industry oversees the NCR and NCC, while BSD has a direct reporting line to the Minister of Finance on legislative issues and FSB-SA is subject to the general authority of the Minister of Finance. 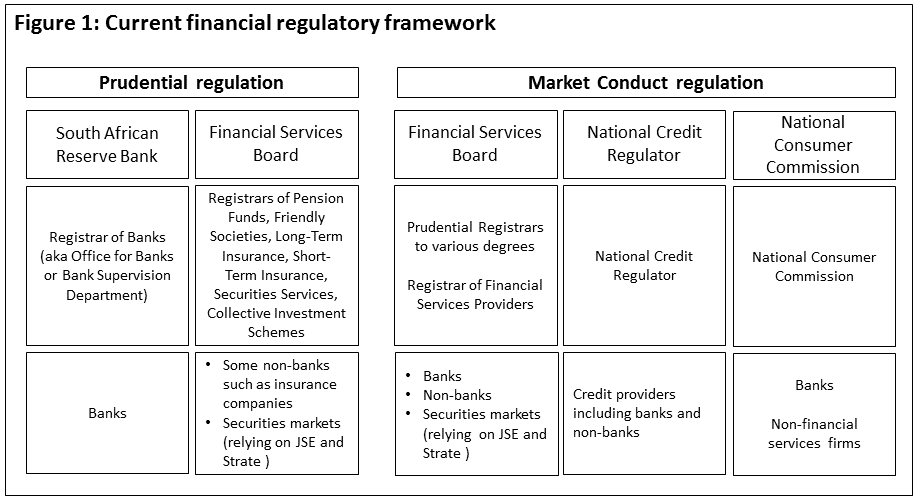 Market conduct regulation focuses on protecting customers that buy financial products or otherwise entrust funds to financial institutions. Such regulation provides consumer protection by addressing the unequal position of financial institutions relative to their customers. The most vulnerable customers are retail clients who often lack the sophistication and information necessary to protect themselves from fraud, market abuse or ill-informed advice and rely on financial institutions and their representatives to look after their interests. Under twin peaks this responsibility will be carried out by the Financial Services Conduct Authority (FSCA). Apart from protecting consumers, the FCSA will be required to promote confidence in the South African financial system and ensure financial services institutions and markets function well and to high ethical and professional standards.

Macro-prudential regulation seeks to promote and enhance the stability of the financial system as a whole and will be the responsibility of the SARB itself together with conglomerate supervision and crisis management and resolution.

The twin peaks model in South Africa is further characterised by:

A simplified depiction of the model is shown in figure 2. 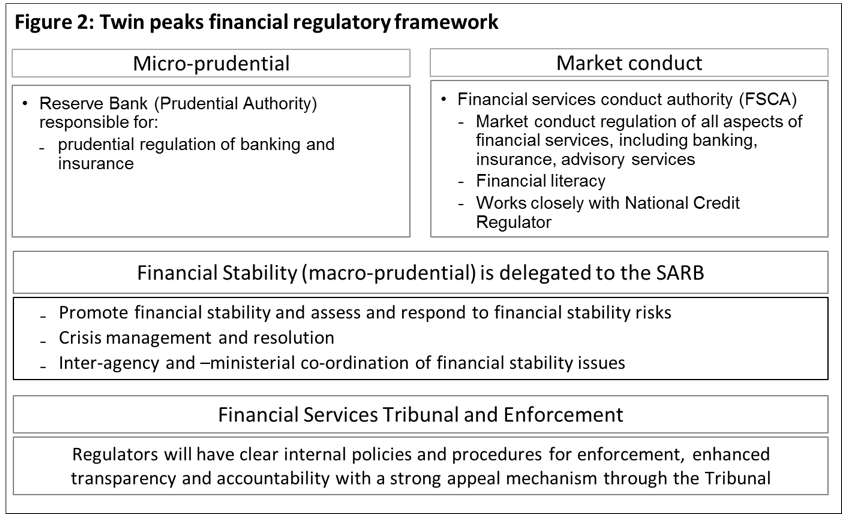 The overarching regulatory and supervisory principles to be implemented are:

The PA and FSCA receive their mandates and powers from government policy and legislation enacted by parliament. They are accountable and operationally independent1 within this mandate. Appropriate governance framework to oversee them will include (i) a regular flow of information, including actual performance against objectives, to the National Treasury; (ii) strategic and annual performance plans as well as annual reports tabled in Parliament through the Minister of Finance; and (iii) regular external audits. The PA will operate within the SARB and be subject to the SARB’s governance arrangements. The FSCA will be governed by a full-time commissioner and executive management team appointed by the Minister of Finance. Independent audit, remuneration and risk committees will have administrative oversight.

Issues still to be addressed

The major issue to be addressed under the twin peaks model is the role of the NCR. Agreement between National Treasury and the Department of Trade and Industry as the disposition of NCR has yet to be reached. Clearly it would be preferable for South Africa to have only one market conduct for financial services. This will ensure consistent market conduct standards in terms of licensing, fit and proper requirements, disclosure, consumer recourse and enforcement across the financial services industry, which will avoid confusing consumers, inviting unintended consequences such as regulatory arbitrage and burdening market participants with unnecessary compliance costs such as different management information and reporting systems for credit versus other financial products.

Medical aid schemes are not addressed in the proposed twin peaks model. Since the management of these schemes require financial expertise and that they are often underwritten and managed within financial conglomerates it would be in the interests of customers to incorporate them.

The Twin Peaks approach to financial regulation separates regulatory functions by objectives, thereby allowing each regulator to focus on a single core mandate. Yet the prudential regulation of certain institutions will be allocated to the FSCA. It may be necessary to elaborate why this approach is considered appropriate.

The twin peaks regulators established by the FSR Act will be primarily funded through levies imposed on financial institutions and fees for services provided by the regulators. National Treasury together with the SARB and FSB-SA have prepared a detailed costing of twin peaks regulators. Estimated fees and levies, which will be implemented through the Financial Sector Levies Bill (tabled to Parliament in November 2016), are shown in the table below.

There are concerns that these levies and fees as well as the costs of increased compliance requirements for regulated entities in terms of licensing, reporting and funding will increase compliance costs and hence the costs passed on to customers.

National Treasury believes benefits of the new regulatory model outweigh the costs. These benefits include:

The implementation in South Africa of the twin peaks model has two fundamental objectives to (i) strengthen South Africa’s approach to consumer protection and market conduct in financial services and (ii) create a more resilient and stable financial system. Introducing a new model of financial regulation is not a simple task and will require effective planning to ensure risks are managed and effective supervisory oversight remain in place throughout the transition.

[1] To be operationally independent regulators and supervisors must be free from both political interference and regulatory capture by the industry.

AI regulation in South Africa and the global regulatory trends